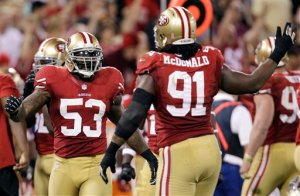 So I’m torn on the issue of Ray McDonald playing today. For those who don’t know (which I’m not who that is at this point), McDonald was arrested on suspicion of domestic violence a few days ago. He has not been found guilty, claims he is innocent, yada yada yada. You know the routine as far as how athletes are supposed to respond when accused of cheating and breaking the law… if not see Wes Welker and his girlfriend “Molly.”

My issue is this: Regardless of innocence should he play today? My gut says no. Jim Harbaugh’s immediate reaction was that of no tolerance. He said “You ask me how I feel about domestic violence. I can be very clear about that. If someone physically abuses a woman and/or physically or mentally abuses or hurts a child, then there’s no understanding.” Harbaugh even went as far as to say that player would no longer be a part of the organization.

Now Harbaugh is back tracking and allowing McDonald to play and the legal process to take its course. My question is should he be allowed to play after taking such a stance? I really don’t think so and I don’t think you owe it to some “legal process” to decide. The bottom line is if you are standing against domestic violence, and one of your employees is accused of it, you should remove that person from the organization on some professional leave until all of the facts are found and the proper conclusion may be drawn. It kills me to say this as a 49ers fan, but this is just one more black eye to an organization that has done nothing but win on the field and lose in the PR department.

So… Should he play?

Sports enthusiast END_OF_DOCUMENT_TOKEN_TO_BE_REPLACED
This entry was posted on Sunday, September 7th, 2014 at 3:29 pm and posted in Uncategorized. You can follow any responses to this entry through the RSS 2.0 feed.
« College Football Playoff Committee Flawed
Ray Rice and NFL Won’t Win »